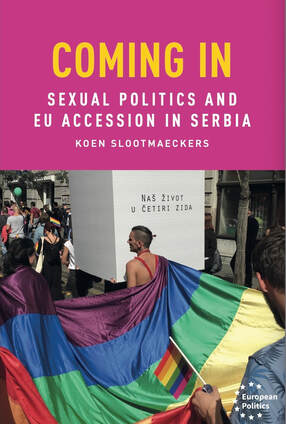 About the Book:
​LGBT rights have become increasingly salient within the EU enlargement process as a litmus test for Europeanness. Yet, the promotion of these norms has provided a fulcrum for political contestation. Based on this observation, this book interrogates the normative dimensions of the EU enlargement process, with special reference to LGBT politics. Reconceptualising Europeanisation, Coming in argues that the EU enlargement is a process of negotiated transformation in which EU policies and norms are (re)defined, translated, and transformed. Empirically, it analyses the promotion of and resistance to LGBT equality norms in Serbia's EU integration process, but moves beyond policies to also inquire the impact of the negotiated transitions on lived experiences. Overall, the book raises important questions about the politics of Europeanisation, its political and social consequences, as well as to what we consider as progress.

​Reviews:
"This book provides an original and thought-provoking analysis of the promotion of LGBT rights by the EU during the long and winding road of accession preparations in Serbia. Often regarded as the a leader in promoting such rights, Slootmaeckers reveals that EU values are not fixed, rather they are a negotiated during the accession process between the EU and candidate countries. This calls for a reconceptualisation of the EU’s behaviour during accession preparations and is therefore essential reading for everyone in the field." (Paul Copeland, Reader in Public Policy, Queen Mary University of London)

"Coming In is an exceptional book; one that stitches together insights on Western Balkan queer politics and Europeanization theory to deliver a set of comprehensive rejoinders to both fields. Indeed, it is impressive just how much Slootmaeckers' Serbian case teaches us about the intricacies of the complicated relationship – both in its potentialities and pitfalls – between the European Union and its candidate countries. Most importantly, Slootmaeckers goes beyond the study of asking ‘why’ some states adopt rights, to normatively question what these rights mean for the people that experience them. This is an important and resoundingly successful effort that will benefit the literatures on tactical Europeanization and the Western Balkans for the decisive years ahead." (Phillip Ayoub, Professor of International Relations, University College London, author of When States Come Out)

“In Coming in, Koen Slootmaeckers traces the manifold ways in which the sexual politics and fight for LGBTQ rights in Serbia simultaneously influenced and were influenced by Serbia's tumultuous and still unresolved accession to the European Union. Theoretically innovative and empirically rich, this book is an essential contribution to the study of both LGBTQ politics and the fraught politics of European Union enlargement." (Jelena Subotic, Professor of Political Science, Georgia State University)

"This meticulous and subtle work looks at campaigns for LGBT equality and recognition, but it sheds light on a broader phenomenon known to people studying EU conditionality in prospective member states: when the EU makes a goal look like a condition, governments respond with gestures that are designed to look like compliance. Is this a step forwards for equality or not? Koen Slootmaeckers guides readers through this enigma as he weaves his narrative with substance, detail and sophistication." (Eric Gordy, Professor of Political and Cultural Sociology, University College London)
Pre-order "Coming in"

EU Enlargement and Gay Politics: The Impact of Eastern Enlargement on Rights, Activism and Prejudice  (Edited, with Heleen Touquet and Peter Vermeersch)​ 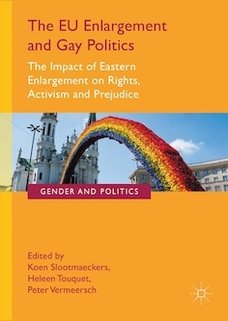 About the Book:
This book offers a well-investigated and accessible picture of the current situation around the politics of LGBT (Lesbian, Gay, Bisexual, and Transgender) rights and activism in Central Europe and the Western Balkans in the context of the enlargement of the European Union (EU). It provides not only thoughtful reflections on the topic but also a wealth of new empirical findings — arising from legal and policy analysis, large-scale sociological investigations and country case studies. Theoretical concepts come from institutional analysis, the study of social movements, law, and Europeanisation literature. The authors discuss emerging Europe-wide activism for LGBT rights and analyze issues such as the tendency of nationalist movements to turn ‘sexual others’ into ‘national others,’ the actions and rhetoric of church actors as powerful counter-mobilizers against LGBT rights, and the role of the domestic state on the receiving end of EU pressure in the field of fundamental rights.

Reviews:
“Still too little scholarship has explored the relationship between European enlargement and gay politics. This timely and comprehensive volume is a welcome correction to that gap. The authors make an impressive contribution to on-going debates around conditionality and Europeanization from the Baltics to the Balkans. The varied case studies and the interdisciplinary nature of the volume—weaving together theoretical approaches from fields of politics, law, sociology, and queer theory—makes this book an indispensable resource for a wide scholarly audience.” (Phillip Ayoub, Drexel University, USA)
​
“This volume offers an encompassing assessment of LBGT rights advocacy, identity politics and backlash in the context of the EU enlargement in Central and Eastern Europe. Among its greatest merits, the book contributes to bridging academia and activism and brings together established scholars, practitioners and civil society actors to offer valuable insights into the promises, challenges and pitfalls of current and future EU enlargement for LGBT rights in regions of Europe that, despite their salience and relevance, have been neglected for too long in sexuality and gender scholarship.” (Dr. Isabelle Engeli, University of Bath, UK)
Buy "The EU Enlargement and Gay Politics"
​​Listen to the book launch event at QMUL School of Politics and International Relations (26 October 2016)